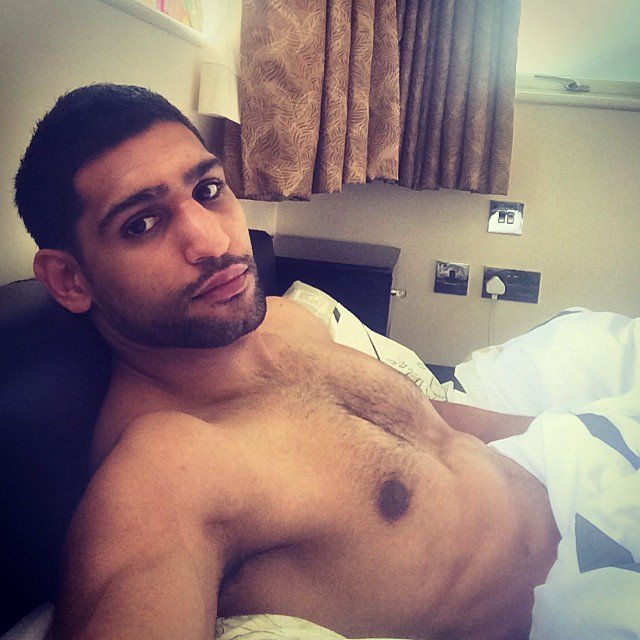 Amir Iqbal Khan is a famous boxer from the United Kingdom. He was born and raised in Bolton, Greater Manchester, to a Punjabi Rajput family with roots in Matore village of Kahuta Tehsil, located in Rawalpindi District of Punjab, Pakistan. He was educated at Smithills School in Bolton, and Bolton Community College. Khan is a Muslim, and a member of the Naqshbandi Sufi Order, along with being an active supporter of the Muslim Writers Awards.

Khan has two sisters and one brother, Haroon “Harry” Khan, also a professional boxer. He is the first cousin of English cricketer Sajid Mahmood, related through a paternal grandfather, Lal Khan Janjua, who moved to England after being discharged from the Pakistan Army.

On 31 May 2013, Khan married Faryal Makhdoom at the Waldorf Astoria in New York City. The couple then flew back to Khan’s hometown of Bolton where a second celebration, a traditional Walima, took place in Manchester, which included 4,000 guests. They have two daughters. In 2014, he earned $15 million, making him the sixth highest-earning boxer that year.

On 4 August 2017, Amir announced that he and Faryal had agreed to split after his skype-jerkoff session video was leaked online. Of course, since we don’t support the leaking of anyone’s intimate videos, we will not post the link in this article. However, in case you’re really interested – a very simple Google search will give you what you’re looking for.

In November 2017, photos emerged of Khan and his wife together. Khan later stated that he and his wife had reconciled.

Khan has past and present involvements in supporting charitable and community causes. After the 2004 Indian Ocean tsunami, he was among those who raised money for its victims, and in the following year, he visited Pakistan to dispense food in a camp set up after the Kashmir earthquake.

He has also been involved with a campaign that promotes child safety around British railways, one that seeks improvements to the criminal justice system, and another that encourages men to play a role in ending violence against women.

On 12 November 2017, Khan arrived in Brisbane, Australia to appear as a contestant on the seventeenth series of I’m a Celebrity…Get Me Out of Here!. Khan was the highest-paid contestant in the history of the show, beating the previous record held by Katie Price. On 8 December 2017, Khan was the seventh person to be eliminated from the show, coming in 5th place overall. The episode which featured Khan’s elimination aired in the UK on his 31st birthday. Khan donated part of his earnings to Barnado’s, for whom he is an ambassador.