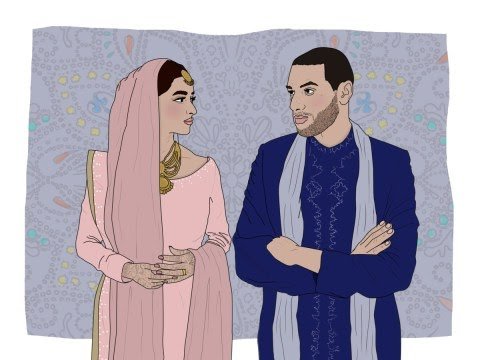 It’s a thing that you wanted to know more about. Obviously, not for most of you infidel bottoms personally because a Muslim man will never marry you in any way, but it’s still interesting to know what happens during the Muslim wedding. Be it for their espect of him and his culture, or simply for you to know what his wedding looked like (if a married Muslim man bangs you) or what his wedding will look like (if he’s still unmarried).

Personally, I’ve been to a couple of Muslim weddings. One of them was actually the wedding of my, then actual, “boyfriend”. Personal feelings at this point aside, the wedding was beautiful and interesting as it is performed in a very different way than the weddings we see every day in the western world or in the movies.

The entire Muslim wedding culture is a very weird experience, especially if you’ve already been to a lot of Christian or just western wedding ceremonies. Some things are similar, but most are very different. Read further if you want to know why!

The only requirement for Muslim weddings is the signing of a marriage contract. Marriage traditions differ depending on culture, Islamic sect and observance of gender separation rules. Most marriages are not held in mosques, and men and women remain separate during the ceremony and reception.

Since Islam sanctions no official clergy, any Muslim who understands Islamic tradition can officiate a wedding. If you are having your wedding in a mosque, many have marriage officers, called qazi or madhun, who can oversee the marriage.
Note for wedding guests: If a Muslim wedding ceremony does take place in a Mosque, you will be expected to remove your shoes before you enter the Mosque.

The marriage contract includes a meher—a formal statement specifying the monetary amount the groom will give the bride. There are two parts to the meher: a prompt due before the marriage is consummated and a deferred amount given to the bride throughout her life.

Today, many couples use the ring as the prompt because the groom presents it during the ceremony. The deferred amount can be a small sum—a formality—or an actual gift of money, land, jewelry or even an education. The gift belongs to the bride to use as she pleases, unless the marriage breaks up before consummation. The meher is considered the bride’s security and guarantee of freedom within the marriage.

The marriage contract is signed in a nikah ceremony, in which the groom or his representative proposes to the bride in front of at least two witnesses, stating the details of the meher. The bride and groom demonstrate their free will by repeating the word qabul (“I accept,” in Arabic) three times. Then the couple and two male witnesses sign the contract, making the marriage legal according to civil and religious law.

Following traditional Islamic customs, the bride and groom may share a piece of sweet fruit, such as a date. If men and women are separated for the ceremony, a male representative called a wali acts on the bride’s behalf during the nikah.

The officiant may add an additional religious ceremony following the nikah, which usually includes a recitation of the Fatihah—the first chapter of the Quran—and durud (blessings). Most Muslim couples do not recite vows; rather, they listen as their officiant speaks about the meaning of marriage and their responsibilities to each other and Allah.

However, some Muslim brides and grooms do say vows, such as this common recitation:
Bride: “I, (bride’s name) offer you myself in marriage in accordance with the instructions of the Holy Quran and the Holy Prophet, peace and blessing be upon him. I pledge, in honesty and with sincerity, to be for you an obedient and faithful wife.”
Groom: “I pledge, in honesty and sincerity, to be for you a faithful and helpful husband.”

Gender separation is a normal part of many Muslim traditions, including Muslim wedding traditions. Not every Muslim couple will choose to separate the genders at their wedding, but more traditional ceremonies will keep men and women apart. During the reception, men and women may celebrate in different rooms, be divided by a partition or simply sit at different tables. In some cases, non-Muslim guests may be seated with opposite genders.
If you are at a Muslim wedding where the genders are separated, respect the custom and don’t initiate interactions with someone from the opposite sex.

After the wedding contract is signed, it’s time to feast. This is called the Walima, and it may feature traditional symbols of fertility and plenty, like fish, chicken, rice and candy-covered almonds. In some Muslim cultures, the walima lasts for two days, so make sure your clothes have some stretch to them.

Guests should also be aware that the Muslim faith forbids the consumption of alcohol. Don’t expect any Champagne toasts at a traditional Muslim wedding.

So, after reading all of this, I am sure that you are already fantasizing about being a bride. However, you should always accept that your man needs to get married to a woman in order to fulfill his purpose in life: marriage life that can produce children is one of the top goals and blessings for Muslim men, therefore it also being one of their goals in life.

Accept your role as just a concubine, serve him well for as long as he wants to be served by you. Who knows, maybe someday he will invite you to his own wedding and let you say your farewells with a blast of a party instead of tears.

Bacha bazi, or "boy play," is a traditional practice in Afghanistan in which older men, known as "bache baz," take young boys, known as "bacha boys," as their sexual partners. The bacha boys are typically between the ages of 9 and 15 and are dressed in women's...
Read More